…was His Majesty the Sultan of Brunei’s 50 Years on the Throne Golden Jubilee Celebration in Bandar Seri Begawan.  The country practically shut down as a public holiday and close to 100,000 strong came down to the capital to either attend the obligatory internal ceremony inside the Istana (palace), join the school children in waving miniature Brunei flags leading up to the heart of the capital or witness His Majesty and the Royal Family move along the main roads in a grand chariot.  Heads of States and the International Media were also invited to the event.

The anticipation leading up to the day could really be felt by citizens and residents of Brunei as most people I know usually can’t be arsed to get out of the house. There was the option of catching the live stream online as well.  But because this is such a grand occasion that occurs probably once in a lifetime, many made sure that they were going to be part of history and capitalize on the event. And there’s so much to be celebrated with the completion of the Sg. Kebun Bridge as well as the Sg. Kedayan Eco-corridor Park just behind the iconic Sultan Omar Ali Saifuddien Mosque.

Jonie, my cousin Zymah and I made a pact days before to take the boat to Bandar early in the morning.  We knew the link bridge would be locked out for the occasion so we resorted to taking traditional means (boat).  Even when we reached Sg. Kebun by car at 7am that Thursday morning, vehicles were stretched for miles on end and the lines to cross the river kept growing.  It felt like a whole day of walking the minute we parked and I was grateful that I had remembered to bring umbrellas along.

Sleepy town Bandar was brimming with people from all walks of life.  I hadn’t seen that much of a crowd probably since my childhood when national events was at the height of its grandeur.  We had to watch out for tables at Babu’s Kitchen for breakfast and rushed our meal just so another family could fill their tummies as well.  I must say the restaurant handled the crowd’s orders pretty well, making sure that there was a team to attend to patrons as quickly and efficiently as possible.

With Brunei being so small in physical size and degree of separation, we were bound to bump into some familiar faces.  Not only did I spot a few family and friends, news colleagues were also in my line of sight and we chatted for a couple of minutes before moving on. Although it is such a privilege to be a news broadcaster or reporter on a special occasion like this, I was glad to be able to enjoy the whole thing as a private citizen that day.

The sun was shining ever so brightly.  Even with the cover of our umbrellas and keeping hydrated, I was sweating buckets.  But we wanted to really utilize our time in Bandar on foot so we walked around the Sg. Kedayan Eco-corridor park behind the mosque twice just to be able to cut across parts of town.  The eco-corridor is coming along great, though I really hope that they will consider putting up more trees for cover and to live up to the ‘eco’ in its description. It risks remaining a concrete jungle to be frequented only after hours otherwise.

The whole celebration started at about 11am, just when I was about to lose my patience and Zymah recovered from a minor blackout scare.  The excitement was very apparent as the whole country came alive with shouts of “Daulat Tuanku!” or “Daulat Kebawah Duli Tuan Patik!“, pretty much similar to the reverberation of saying “Long Live His Majesty!”.  Jonie, Zymah and I were first docked at the Clock Tower intersection in the heart of the capital. The procession of Awang-Awangs, band, motorcade and the grand chariot carrying Royal family members passed at a sedated speed but the crowd was clambering over one another to catch photographs of His Majesty the Sultan, Her Majesty the Queen and other royal family figures with their phones and cameras. I wish I could say I took great shots, but I wasn’t anywhere near, being short and considerate of other people in front (I’m too nice like that).  So I’ll have to resort to giving due credit to rightful owners of these photos (actually most were taken from social media): 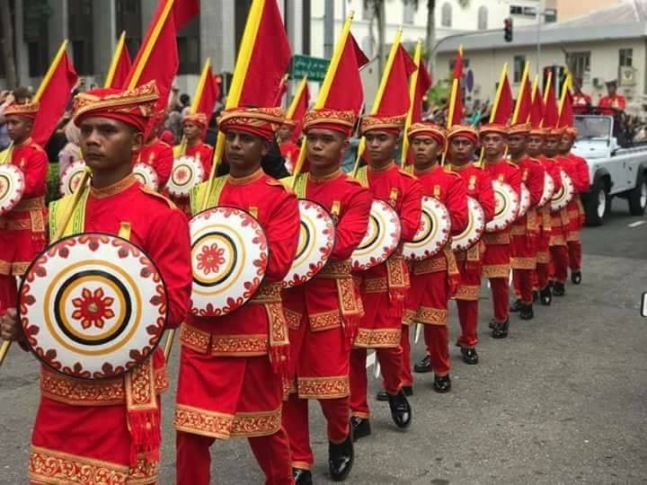 When the procession moved on from us, we cut across the road hoping to catch it again at the turn in front of the SOAS Mosque.  I must say, I was overwhelmed with patriotism then as years of how his reign affected me flashed in my mind – how my father served as a diplomat to represent Brunei abroad, accorded affordable (free) and world-class education, free medical and other benefits I got to enjoy even as an adult. I was also a bit relieved that the telecommunications signals were flooded with users so that I could just forego looking at my phone for half a day to concentrate on the occasion fully. You know, be in the moment.

When the procession passed us a second time, we decided we had our fill and proceeded to the boat landing (“Tambing”). I underestimated the crowd coming down from the surrounding Kg. Ayer (Water Village) and Sg. Kebun. There must have been at least 1,000 people waiting on and around the steps, shouting for water taxis to take them across.  I wish that authorities better managed the waterways as it wasn’t just the usual residents or travelers going by boat that day.  They should’ve anticipated that the crowd was going to be taking other means than cars where parking positions around the city are already limited.   There were no signs along the river banks, no posted boat schedules and lines were practically non-existent. The water taxi operators had to give in to pressure from people shouting from the steps. It was almost surreal when we were finally seated on a boat as we had waited an hour just to be able to get the attention of a water taxi.  Minutes after, we found out that a boat had sunk due to the weight of passengers so that should give you an idea of how crazy it was.

There was still life at Sg. Kebun as people made their way home or stopped over for a late lunch from their Bandar experience. We walked half a mile to our car which was just parked right in front of a renowned family restaurant.  It was good though – it was a whole lot of walking for someone who avoids cardio otherwise.   I also got to witness a historic moment in my country.

By the way, my family and I will also be catching the official opening of the Sg. Kebun Bridge on the 14th October.  The event will be highlighted with the procession of ships and decorated floats as well as fireworks display.  Can’t hardly wait!

Detailed news update coverage of the Golden Jubilee Celebration can be found here.

I will also be updating the experience on my YouTube vlog channel.

View all posts by Mell